Android is the most popular mobile platform on earth, but since the first versions it has suffered of a serious and growing problem: fragmentation.

Google recently released version 4.4, codename KitKat, that could solve this problem, but it’s too early to know that for sure, so in the meanwhile I decided to analyse this problem to understand how thing have evolved over the last years, something that could be useful for everyone which is developing for Android.

Using the Wayback Machine, a website which stores snapshots of web pages over time, I collected all the Android distribution statistics published by Google in their Android dashboards. Unfortunately the earliest snapshot available is dated 1 June 2012, so I don’t have any data before that date, but this should be enough to get an idea of how things evolved in the last few years.

The following table contains all the data I gathered:

As you may have noticed, numbers in red are used when a version of android has lost distribution share (respect the previous month), whereas green numbers show a growing distribution share. With that in mind it’s clear what’s going on:

Obviously not all of these points will still be valid in the next few months if Android 4.4 will manage to solve the fragmentation, but to be honest I don’t think that’s going to happen very soon.

To have a better visual understanding of the data I’ve also plotted the evolution of the 6 main versions over time: 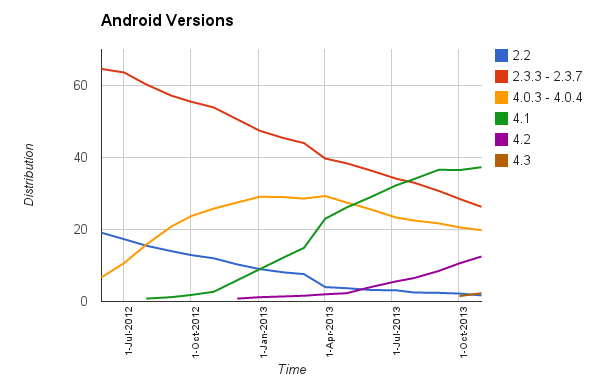 That’s it for now, but I’m probably going to publish an updated version of this post every 6 months, so keep an eye on this blog if you are a mobile developer or if you are interested in Android in general.