Last night a video on Reddit caught my attention: “Bjarne Stroustrup: Why you should avoid Linked Lists“. Basically it’s a 8 minutes video in which Bjarne Stroustrup tells you to not use linked lists because they suck. 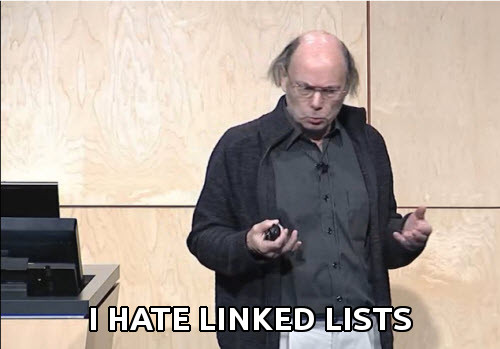 After watching the video and assuming Stroustrup was obviously right, I decided to write few benchmarks to test how much linked lists perform compared to other STL containers.

These are synthetic tests based on spaghetti-code I wrote without considering any kind of optimization or coding / design style, they test exclusively STL containers and I ran them only on my Linux machine.

Things could be totally different in your program running your code on a different machine.

The first one tests the performance of adding objects at the end of the container using the push_back function.

The second one tests the performance of inserting objects at random positions using the insert function.

The Third one tests the performance of removing object from random positions using the erase function.

All the times are in milliseconds, lower values (green) are better.

It’s easy to see the pattern here… according to these tests at least, push_back is a (virtually) free operation for any container, but for everything else list is the worst performing container, whereas deque is the best one.

You can download the source code of these benchmarks and run them on your machine, then feel free to post your results here commenting this post.