This is the second update of a series of posts dedicated to tracking and analysing the Android version distribution over time. The time frame considered in this update covers the last 2 years of Android: December 2012 to December 2014.

If you are interested in older data you can also check the previous update and the first post of the series which cover the Android version distribution since June 2012.

The following table contains the data I gathered from the Android developers dashboard in the last two years and shows the distribution share for each Android version (versions with less than 0.1% distribution are not shown): 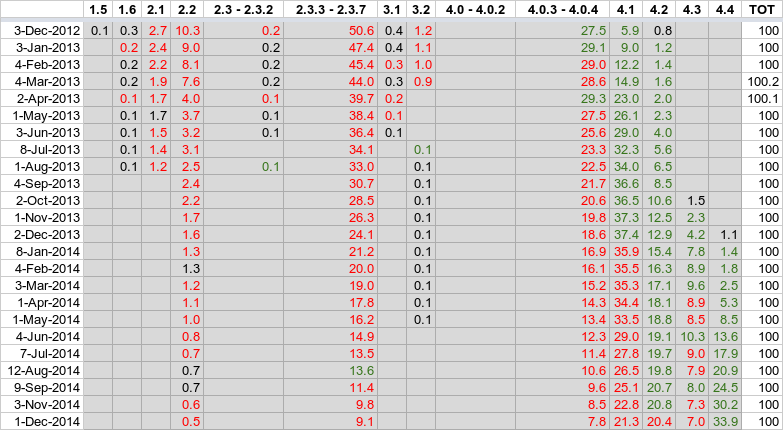 I should probably point out that since August 2013 this data is gathered from the new Google Play Store app, which supports Android 2.2 and above, devices running older versions are not included, but at that time they accounted for about 1% of devices that checked in to Google servers.

In the last 6 months much happened in the Android ecosystem:

To have a better visual understanding of the data I’ve also created a graph of the evolution of the 6 main versions over time, these are the distributions with more than 1% of market share which overall cover 99.5% of the Android market. 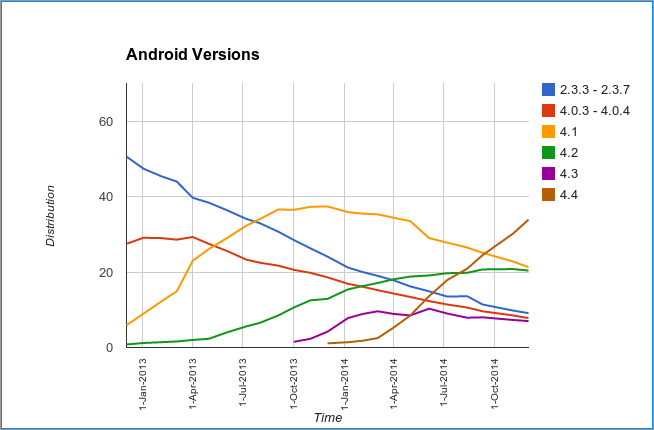 Overall Jelly Bean is still the most used Android version with a 48.7% of market share, but the raise of KitKat in the last months has been very strong and with the recent release of Android 5.0 Lollipop things probably will be completely different when I’m going to post the next update in 6 months.

I may also decide to publish the next update in 3 months if something interesting happens or if enough people are interested, so if you are, leave a comment and let me know.