In this post I will share my thoughts on why Google I/O 2015 keynote was totally pointless, especially for Android users and developers.

Yesterday Google introduced the next version of Android, for now known as “M” (which probably stands for “Milkshake”), and several other updates on projects like Nest and the self-driving cars.

I watched the keynote live and at the end I felt like I wasted 2 hours of my life for something totally pointless and useless.

Don’t get me wrong, everything they introduced and announced yesterday was cool and a good step forward for Android and other Google’s products, but it doesn’t make any sense because of this: 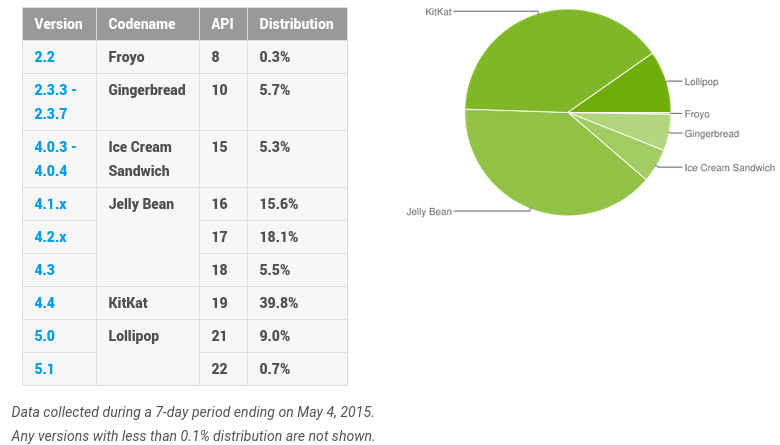 Android 5.x Lollipop, the latest Android version released in December 2014 or 6 months ago, is used only by less than 10% of all the Android devices.

Google will update those stats in few days and I’m sure that number will go up, but it’s hard to believe it will be anything above the 15% mark and in the best case scenario it will be around 40% at the end of the year.

As developer, I’ve been following and writing about Android distribution since November 2013 and in the last 2 years nothing has changed or improved, it just got more fragmented and disappointing. That’s a real nightmare for developers and a big setback for users.

Google can announce all the cool features and updates it wants, but what’s the point if after half year only 10% of the Android users can benefit from it?

As a developer who’s actually working on an Android game I don’t know what to do with new features which will be supported by a minority of my userbase and I have to carefully consider if it’s worth using them or not.

What people at Google really need to do is finding some mutual strategy/agreement with OEMs to release system updates to all the devices which can support them. That’s what I was hoping to hear yesterday and that’s what I hope to hear next year. Obviously I understand that’s a titanic challenge, but something has to be done.