Growing my LinkedIn connections for a month

About a month ago I decided to run a social media experiment growing my LinkedIn connections as much as I could. In this post I am going to report the results.

Last month I decided I wanted to grow my LinkedIn connections, so I made a growth plan and started my social experiment.

The idea was simple: adding people and being active every day.

I planned to run this experiment for 2 months, but in the end I decided to stop after 1 because at the moment I have to focus on another project. I believe 1 month is enough to get some real results anyway.

Another reason for stopping the experiment was that LinkedIn makes your life very hard if you don’t have a paid account. I got my search blocked twice because I was simply using it daily.

If you don’t want to pay the monthly subscription, the only options are activating the free premium month they offer or using a different account to search people.

Adding people to my network

Initially I planned to add 50 people every day, then I decided to aim for a more achievable goal adding 25 people 5 days per week.

The people I added were mostly C/C++ and Qt developers. That’s because I wanted to play it safe and try to approach people who were likely to accept my request.

When I was adding someone I was always adding a note to my connection request.

Hi, I am trying to connect with C/C++ and Qt developers for future projects and collaborations. Can I add you to my network?
Thank you

Nothing fancy, but I was usually adding a little context or side story to it. For example I was mentioning the city or country where the person was based in. Eventually I was also mentioning I had the intention to move in that city/country when it was true.

Most people did not reply to my message, on average only around 10% did, but I had a short chat with everyone who wanted to.

I tried to publish content and to interact with people every day, but I have to admit I did not do too well here.

I managed to post something 5 times per week, but I did not interact much with people. In particular I almost never commented other people’s posts. 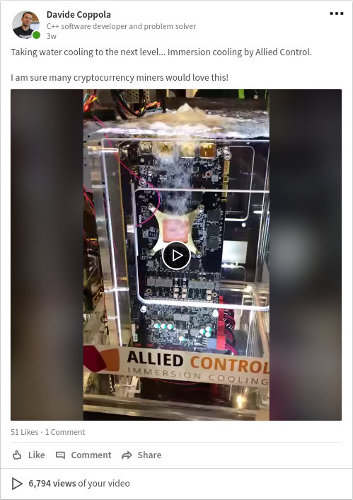 That should not come as a surprise as it’s pretty well known the LinkedIn feed algorithm favourites videos.

The second most successful post was a photo (with a long text), which achieved 2300 views, 26 likes and 2 comments. 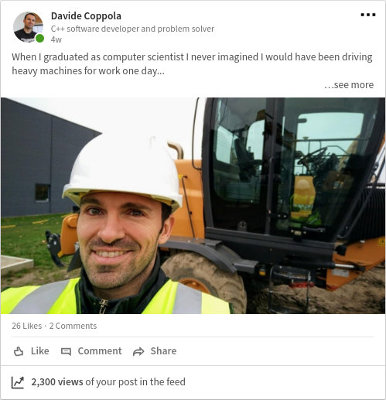 That’s a big difference with the video, but I should also point out that I posted that photo at the beginning of my experiment, whereas the video was published in the middle of it.

I started with 1428 connections, so obviously I wasn’t starting from scratch, but I don’t believe this influenced my results. Obviously starting with a new account would have been more challenging, but I am pretty sure any average account could achieve similar results.

After 4 weeks my connections were 1900, which means I got 472 new connections and represents a 33% growth. This was after adding 715 people over 4 weeks. Without considering the people who added me (who are not many), the conversion rate was 66% or 2 in 3 people accepted my connection request. 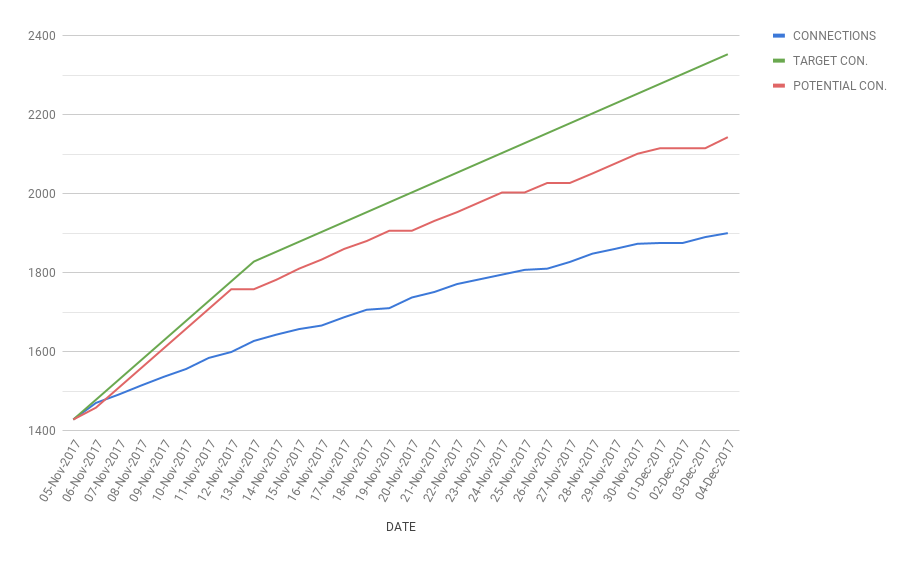 As mentioned before, I added 50 people every day the first week, then I tuned that down to 25 people added 5 times per week. That’s why the green and red lines are steeper the first 7 days.

This social experiment was time consuming and didn’t make me become a LinkedIn influencer (that was not the goal anyway), but I am very happy with the overall experience and I learned a lot from it.

I have growth my network significantly and I (virtually) met a lot of people I didn’t know before. I also got a couple of (potential) job offers and I am still discussing possible future collaborations with some people.

My posts now get more views (on average), even if I didn’t make it to a number big enough to go viral every time I post something.

Now that the experiment is over I am planning to continue to connect with people on LinkedIn and to interact more. I also want to try to expand my network to other categories of professionals like business developers, managers and potential clients. That will be the real challenge.

If you enjoyed what you read don’t forget to subscribe to the blog newsletter to get notified of future posts.