Market share of the most used C/C++ IDEs in 2018, statistics and estimates

These are the results of a research study to determine which are the most used C/C++ IDEs in 2018. They include the estimated market share for the top IDEs, but also the estimated number of users and of C/C++ developers in the world.

What are the most used C/C++ IDEs?

I wanted to find out what are the most popular C/C++ IDE, so I decided to run several polls and to collect data to get some answers.

Few weeks and many votes later, these are the top results:

As you might have noticed, the second place is hold by Vim, technically a text editor, but many developers use it with (several) plugins as a proper IDE.

The full results including all the entries with at least 1% of votes are showed in this pie chart: 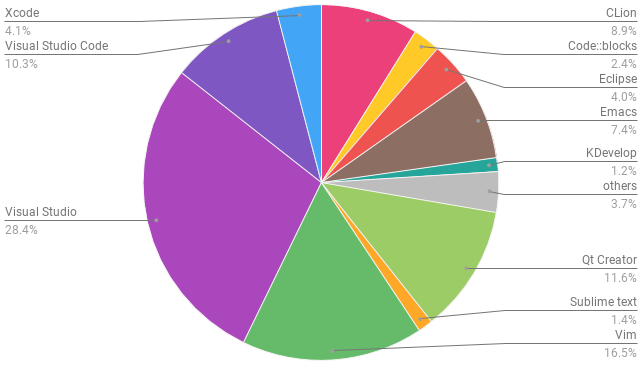 In this chart “others” includes all the entries with less than 1% of votes. Some notable IDEs in this group are C++Builder, CodeLite and NetBeans, whereas some text editors are Atom and Notepad++.

Another way to see the same numbers is using a bar chart, which I believe is easier to read when comparing more than 4-5 options. 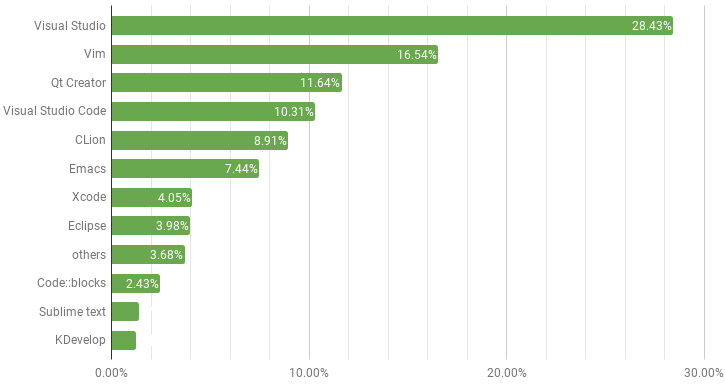 Whatever the chart we use, It’s clear that the most used C/C++ IDE is Visual Studio, which holds more market share than the 2 following alternatives.

The distance between Visual Studio and the other IDEs becomes even more clear when excluding all the text editors from the answers: 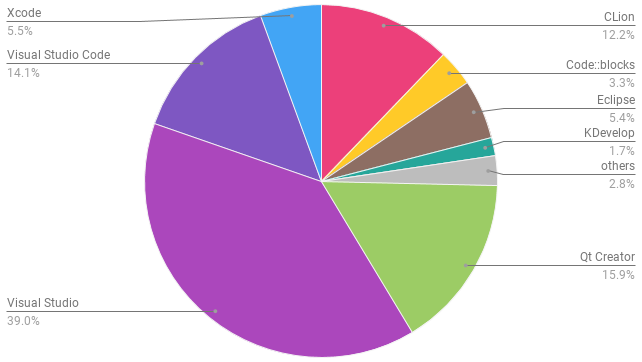 As before, the same numbers are here available as bar chart: 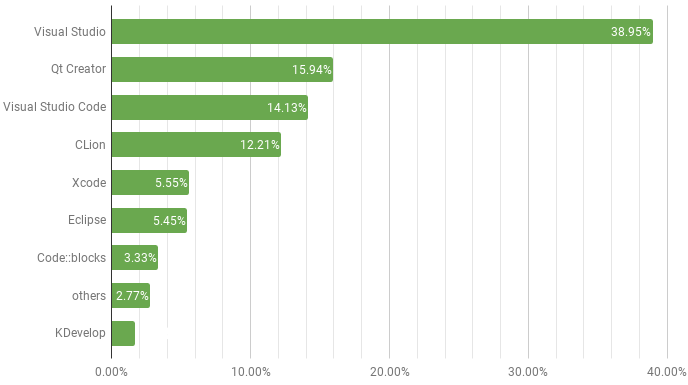 Another interesting number to consider is the amount of people who replied selecting a single choice versus the ones who selected more than one:

Basically 2 out of 3 people (mostly) use a single IDE for their C/C++ development.

Estimating the number of users of each C/C++ IDE

The  starting point of this estimate is assuming the total number of software developers is at least 22 millions. That number comes from a study of Evans Data which considers the 40 different countries in 2017. 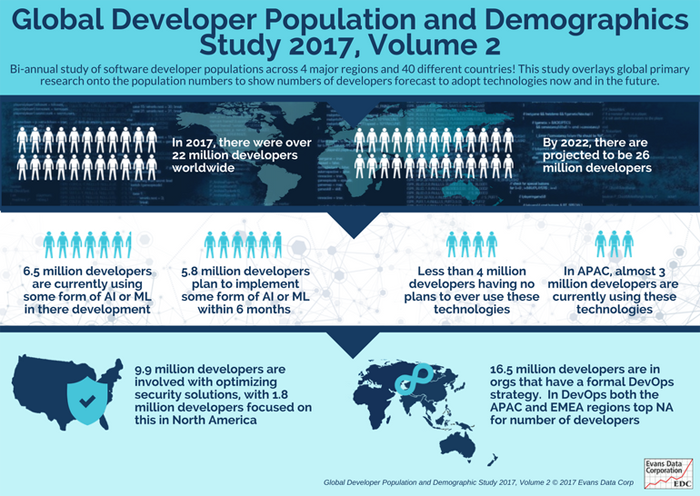 Using the TIOBE index from 2017, the estimate of C and C++ developers is 3-3.7M. The problem with the TIOBE index is that it’s more an internet popularity index rather than a proper market research. It’s fair to consider it as a lower bound for this estimate.

At the end of 2016, a senior manager of Microsoft said that there are over 1.5M C++ developers using Visual Studio. I am assuming that number includes C developers too. Projecting the market share from my poll gives a total of 5.3M of C/C++ developers.

Putting all together I believe it’s fair to say that the number of C/C++ developers in the world is around 5.1M.

Now it’s possible to update the results of the poll with some users estimates:

Keep in mind that these are not the numbers of total users for each tool, but only the number of people who use them as C/C++ IDEs.

How good are these numbers?

The polls I have been running collected (valid) entries from 1860 voters.

Which means that statistically, the margin of error of the poll is around 2.99% with a confidence of 99%. That basically means the results shouldn’t be too far from reality.

Most of the data has been collected from the r/cpp community on Reddit. Other sources are Linkedin, Hacker News, Twitter and a couple of forums and Telegram groups dedicated to C++.

Clearly it would have been better having a more heterogeneous distribution of the sources, but on the other hand the majority of the votes should come from actual C/C++ developers and it should reflect the current market accurately enough.

If you enjoyed this post don’t forget to subscribe to the blog newsletter to get notified of future ones.