Controlling an RGB LED with Arduino

In this simple project I’m going to show you how to control an RGB LED (common anode) using an Arduino Uno and few push-buttons.

In this project I’m going to control an 5mm RGB LED using three pushbuttons and an Arduino Uno.

Pushing a single button will increase gradually the brightness of the corresponding colour channel until it will reach its maximum brightness, which basically means you get a Red, a Green or a Blue light. Pushing more buttons at the same time allows you to get even more colours. For example pushing the first and the second buttons makes yellow, pushing the first and the third buttons makes fuchsia, etc.. 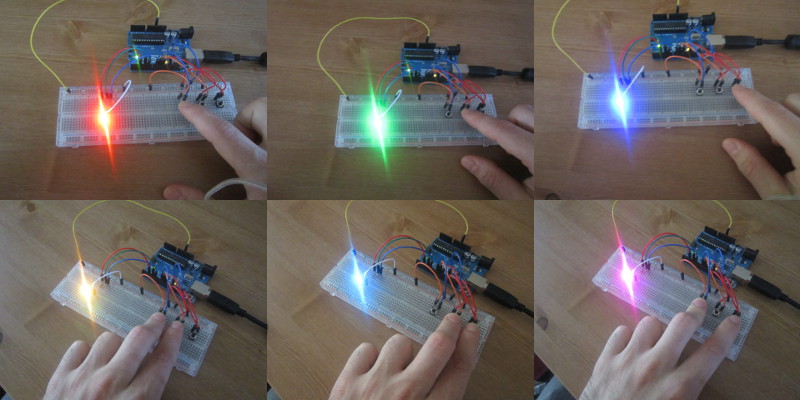 Obviously this is just a simple project aimed to show you how to control an RGB LED, but it should be quite easy to extend it and to use it as a starting point for more interesting experiments with RGB LEDs. For example a simple and quick modification could be using 6 pushbuttons to have full control on the brightness value of each colour component (3 pushbuttons to increase the brightness of the 3 colours and 3 pushbuttons to decrease it).

This is what I used for this project:

An RGB LED is an LED which actually contains 3 LEDs: one Red, one Green and one Blue. By controlling the brightness of each of the three LEDs you can get pretty much any colour you want. 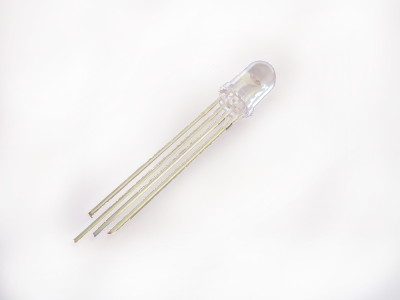 According to the type of RGB LED, the 3 LEDs can share the anode or the cathode, which is the longest pin coming out from the LED’s head. How you may guess, the other three pins are used to control the three colours. 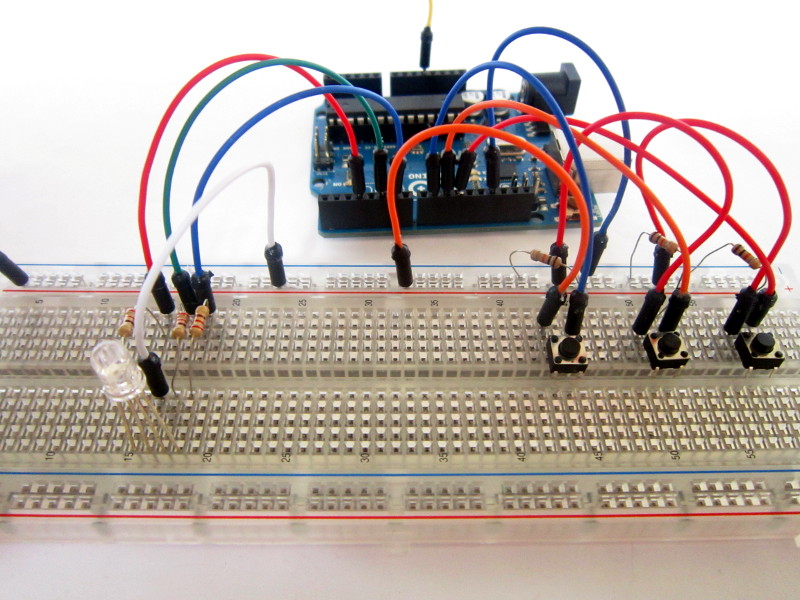 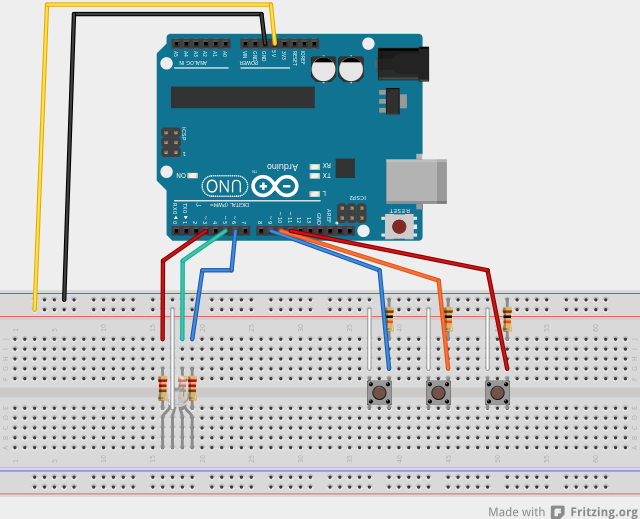 For this tutorial I decided to split the sketch in 3 blocks of code:

That’s just for clarity, so if you want to use this code in your project you’ll need to copy and paste the three blocks in a single file or you can download it from our website.

Before starting with the code I should probably remind you that this project is based on a common anode RGB LED so to turn a single component fully on we need to write 0 to the corresponding Aruino pin, whereas to turn it fully off we need to write 255. These values are inverted when using a common cathode LED so the whole logic of this sketch should be inverted if using a different type of LED.

In the first block there’s all the code used to declare and initialize global and constant data.

Comments and names used for variables and constants should be enough to understand what’s going on here. Probably the only thing to point out is that I’m using two arrays (instead of 6 constants) for the values of the input and output pins. This will allow to save repeated code using a for cycle to get the values from the buttons and to write the values to the LEDs.

The setup function is pretty simple, all it does is initializing the pins and writing 255 to the three LEDs to turn them off.

Finally the main loop which is the core of the sketch.

A for loop cycles through the three buttons to get their values and, according to that, to determine the value of the corresponding colour component.

The brightness of the 3 colours is changed gradually using 3 timers which basically add a delay of COL_INTERVAL ms to every change in the values, creating a smooth transition between the OFF and ON state and back.

The last instruction of the loop is a delay which keeps the logic running at about 60FPS (Frames Per Second) and allows to not care about de-bouncing the values read from the buttons.

Finally a short video to show you the project in action:

I hope you enjoyed this simple project and that everything was clear, but if you have any question don’t hesitate to leave a comment and I’ll be happy to answer.